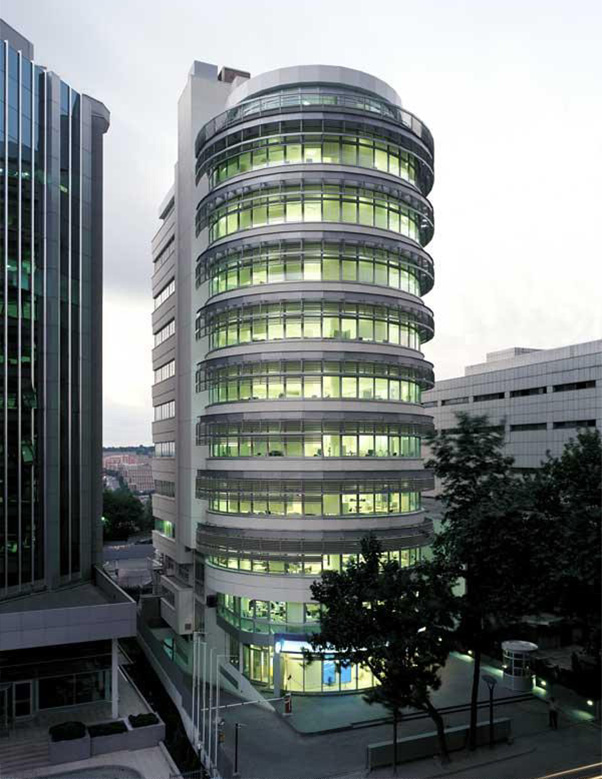 I was asked to design a distinctive office building with approximately 500 m² of space at each floor, available for leasing as a whole or on floor basis. It was to be built on a former factory plot in Maslak, on Eski Büyükdere Avenue. The owners had a feeling for the architectural style. From the sketching stage on, I enjoyed sharing architectural solutions and any concerns with them.

The form of the plot and the zoning requirements initially brought to mind a plain rectangular prism building. However, as I looked deeper into the area, I came to realize that a contextual modesty to stand out against a homogenous urban texture will be meaningless at the heart of the chaos which grew without any concern for urban planning.

Kapital Business Center gave me the opportunity to take an active role in a construction project in Turkey, after my education and career in France. I wanted to apply the experience I gained in France, particularly the concern for urban character, to my first ever project in Turkey. I wanted to give an interior street with a cafe to people who would otherwise be imprisoned in buildings with tightly shut windows through the day, and who would have no place to go on foot during the short lunch breaks. In the first sketches that interior street had not been much more than a simple passage connecting the avenue to the street behind the block. However, as the design progressed, it was enriched with a courtyard at lower level, a café opening to the courtyard, elements of green, and cascaded ponds. Even though the owners closed down the interior street due to security considerations, I hope one day the pedestrian life I imagined will be possible.

What the owner wanted, and what the plot was made for had converged substantially. The building had to have a distinct character. I sometimes think that smaller multi-piece and mobile structures can draw more attention compared to larger and single ones. Therefore, the main part of the business center had to be multi-piece and mobile. In the beginning, I divided it into two. Then, the circularity on the avenue side arose through persistent flows of the pencil over the sketching board. The circular form by itself gave the building a character. Inside, an interior space opening to the tree-laden perspective of the avenue came to exist, available for use as an open office. The rotary impact was reinforced with metal solar shades.

The square structure contrasts with the circular form. The facades of the structure developed in line with the 'will' of the directions and environment. To the west, where a tallish building rose, lower horizontal band windows and exposed concrete columns were used to serve as the background of a cylindrical body on the avenue side. To the east, where the neighboring building was a lower one, a lace of solar shades and catwalks and railings connecting to the solar shades positioned in front of the structure with the circular plan were designed.

By mobilizing the pass connecting the two structures, I tried to develop an internal connection to human scale and to the dynamic articulations in the exterior. I also intended to cover the whole ground level with black granite to make the white exposed concrete surfaces and metal solar shades of the building shine like a jewel contrasting on the darker velvet background.